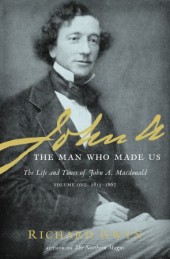 In our ongoing series of interviews regarding new book releases, I (Adam Coombs) talked with Richard Gwyn regarding his new biography of John A. Macdonald, entitled John A: The Man Who Made Us. This is the first volume of a projected two volume biography on Macdonald. The interview first aired in October and is available at the end of this post.

In the 1840s Britain began to move toward complete free trade. Combined with a worldwide economic downturn, manufacturers and farmers in the United Provinces of Canada began to rightly fear economic ruin. Over a three year period, property values in Montreal had fallen by over 50% while Canada’s exports had fallen by over 40%. In response, over 1000 Montreal businessmen, including two Molsons and two Redpaths, supported annexation into the United States. During this period John A. made no speeches nor did he write letters to a sympathetic newspaper. Rather, in typical fashion, he quietly helped to organize the British America League which argued for unrestricted reciprocity, or free trade, with the United States. By the time the group disbanded in 1850 the same Montreal businessmen had embraced the idea of reciprocity. Macdonald had never made any definitive statement regarding his own beliefs yet the current crisis was averted.

The entire annexation crisis and Macdonald’s reaction exemplify both his leadership style and the political culture of pre-confederation Canada. Macdonald was, by supporters and enemies alike, called “old tomorrow” for his strategy of avoiding taking positions on issues and delaying decisions until a suitable result was achieved. Fiery speeches and declarations caused division and in the multi-religious, multi-lingual patchwork of 1850s Canada and a successful politician could never afford to be divisive. Furthermore, Canada as such didn’t exist yet and was constantly threatened by both internal tensions and the ever preset specter of the United States. It is both the personal style of Macdonald and the challenges threatening our early country which Gwyn focuses on.

In popular culture and Canadian historiography, John A is portrayed either as the loveable drunk who was utterly corrupt or as a the mythic figure that created our nation with his own bare hands. Gwyn seeks to deal with both these perceptions and create a new version of Macdonald. Unlike other biographies of Macdonald, Gwyn focuses on the man’s personal life beyond simply his drinking. There are engaging accounts of his attempts to care for his sick wife Isabella and of his attempts to re-connect with his estranged son Hugh John. These snippets of his personal life serve to add much needed depth to a man who is too often portrayed as someone devoid of true human characteristics. Gwyn doesn’t minimize Macdonald’s accomplishments but rather seeks to allow the reader to understand the man behind the Canadian myth.

The largest complaint about the book is it is pop academia. While it is extremely well written and engaging, the lack of footnotes, for a history geek like myself, occasionally got annoying. As well anyone well versed in Canadian history will find many of the sections which provide context as dull. Gwyn even warns readers with a basic knowledge of early Canadian politics to skip certain sections. If you are expecting a scholarly, in depth biography then you will be disappointed. However if you want an entertaining and engaging read then this book is certainly highly recommended.

At 7:30 I will be speaking with Dave Bidini, former member of Canadian indie-rock institution The Rheostatics and the author of the new book Around the World in 57 and a Half Gigs.

Larry O’Brien challenged the OPP to either end their investigation or lay charges, looks like he got his wish.

Robert Pickton is guilty…but not of the crime the RCMP wanted to get him for.

Schreibergate continues today. Once he is done we get Mulrooney.

Philip Pullman and his books are creating quite the stir. Another school pulls The Golden Compass.

Robert Latimer, who ignited a national debate on euthanasia, is denied parole.

City of Ottawa to help businesses affected by the partial building collapse.

The CIA used “alternative interrogation methods” and then destroyed the tapes. Wow!

Ottawa City Council wants 1% of the GST but not really sure how to go to go about getting it.

Bernard Lord will find out what the deal regarding bilingualism.

Don’t give panhandlers change, give the money to a kindness meter instead.

Opening up the cellphone market in Canada. 40% of the spectrum to be reserved for new providers.

Centretown Movies future up in the air.

No cuts to front-line services in Ottawa.

Canadian Islamic Congress launches a human rights complaint against Macleans for this.

As usual we air on CKCU 93.1fm from 7 to 9:00am. For those outside of Ottawa you can listen live on the web at the CKCU website. This week we will be joined in studio by a former host of this show, Luke Cote and fellow Carleton University Debating Society member Andrew Lawrence.

At 8:10 we will be speaking with Warren Kinsella who has just published his new book The War Room.

At 8:30am we will be speaking with Wayne Petti of Cuff the Duke who will be playing a show this Saturday night at Barrymores.

Duke of Somerset to come down…again but this time its planned.

NDP MP is in trouble due to his election financing practices.

Dion seeks clemency for man on death row in Montana.

Republicans win election in Australia and now want to get rid of her majesty.

Nothing like a good ol’ fashioned book banning. Halton Catholic School Board is at the centre of this one.

At 7:30 I will be talking with Christine Blatchford  about her new book Fifteen Days about Canadian troops in Afghanistan.

We’ll also be joined by Phil Robinson of People for a Better Ottawa, a citizen’s group that (in short) advocates for greater city funding for social services. They had their city budget kick-off last Tuesday morning.

As well we will be talking with a representative from the Otesha Project who had their fifth anniversary celebrations on Sunday.

After tazering a Polish man twice in the Vancouver airport, a public inquiry has been launched. Shocking!

Want to smoke in your car with your kid? After today that will be against the law in Wolfville NS.

UN complains to Bush Administration about upcoming murder trail of Omar Khadr. Good to see the UN will lookout for our citizens when Canada won’t.

Violent youth and identity thieves, watch out. The Conservatives have you in their sights.

BC NDP to take steps to increase number of women and minorities in the BC legislature.

Music downloaders beware. The Tories also are out to get you.

This week Adam will be covering for Lucy and playing music from 9:00 to 10:00am. Tune in and judge him based on his musical tastes.

At 8:30, we’ll be joined by Phil Robinson of People for a Better Ottawa, a citizen’s group that (in short) advocates for greater city funding for social services. They have their city budget kick-off later in the morning.

Maclean’s has its annual university rankings out: Carleton’s number 7!
Further accusations against NATO regarding torture in Afghan prisons.

And Amnesty International doesn’t stop there. A week after announcing Canada wouldn’t seek the return of prisoners facing the death penalty, Canada refuses to co-sponsor a bill which denounces the death penalty.

Portrait Gallery looking for a home and not necessarily in Ottawa.

Want $1000 dollars? Write an essay and collect 25 signatures on a petition.

As usual we air on CKCU 93.1fm from 7 to 9:30am. For those outside of Ottawa you can listen live on the web at the CKCU website.

At 8:10 we will be having our own Ontario Election round table discussion. Representatives from all four major parties Carleton campus clubs will be joining us live on-air to discuss the big issues in the campaign so far and what they see as the defining issues in this election.

More expensive to fix Landsdown than actually tear it down and replace it.

Loony hits parity with US dollar!

Another lawsuit over light rail in Ottawa.

As usual we air on CKCU 93.1fm from 7 to 9:30am. For those outside of Ottawa you can listen live on the web at the CKCU website.

Conservatives are bringing the sponsorship program back.

The X-Prize version two: Put a robot on the moon for 20 million.

Nova Scotia to outlaw strikes by heath care workers in the province.

Ottawa City vehicles to have “Support our Troops” decals on them.