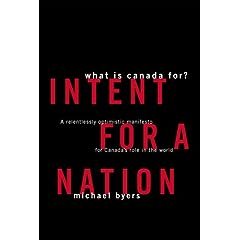 I had the chance to speak with Michael Byers, professor of International Politics at the University of British Columbia and author of Intent For A Nation to day about his new book. I plan on writing a proper review later, but should point out that the subtitle “A relentlessly optimistic manifesto for Canada’s role in the world” is very apt: at times, the book almost feels like it could be titled “Things Lloyd Axeworthy might be doing if he was Prime Minister and not President of the University of Winnepeg.” I’m cool with that, as even if I hold a much more cynical view of things, its nice to know that someone can make a passioned, hopeful case that we can do more than trade against perceived past glories as we fiddle about as a nation.
Note: If you experience problems with an embedded player, such as accelerated voices, download the file or subscribe through iTunes.